Mr. Mignini practiced law in the State of Maryland for over 35 years. He counseled thousands of clients throughout his career and obtained numerous favorable results due to his passionate representation and commitment to the law. 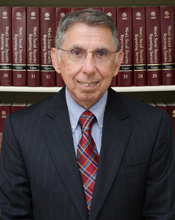 Past Affiliations and Memberships

A lifelong resident of Baltimore, Tony Mignini graduated from Loyola College in 1966. He served as an officer in the U.S. Army until 1969. After being honorably discharged, he worked in a number of offices at the Social Security Administration. As staff associate, he worked as a disability claims supervisor, in the Office of the General Counsel, and in the litigation and hearings office for Medicare. He was admitted to the Maryland Bar in 1974, to the U.S. Circuit Court of Appeals for the Fourth Circuit in 1977, and to the U.S. Supreme Court in 1980. While in practice, he was a member of the Maryland State Bar Association, Maryland Trial Lawyers Association, Harford County Bar Association, and a sustaining member of the National Organization of the Social Security Claimants’ Representatives. He is a past President of the St. Thomas More Society of Maryland, Inc. (a Roman Catholic lawyers group), and sat as an inquiry panel chairman and member of the Maryland Attorney Grievance Commission. Mr. Mignini retired in 2013. He currently lives in Naples, Florida, where he enjoys golf and spending time with his children and grandchildren.

If I were to tell you the full extent of my esteem for Mr. Demuth you would think it was a fake review - it would be too good to be true. He gave us all the tools we needed to see our way ahead in this overwhelming process, to advocate for ourselves, and to communicate our family's story in a way that would resonate not only on a personal level but clear the administrative/legal hurdles - of which there are so many. We are lucky to have found him and I would recommend him to 100 out of 100 people fighting for their right to be heard.